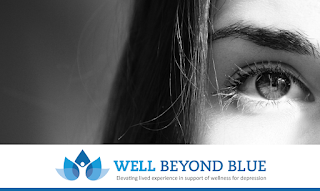 Depression is often part of the journey for Sleep Apnea patients, adding even more challenges to a difficult path. The ASAA is partnering with the Depression and Bipolar Support Alliance to help FDA and life science companies understand what’s most important to every person living with depression. Be part of this joint effort by responding to the “Supporting Wellness” survey.

Since going live on August 1, 2018 the survey has received over 4,500 responses to this first-ever peer designed survey that enables respondents to share views on wellness as well as, identify research priorities. Please register to attend the DBSA-led Patient-Focused Medical Product Development Meeting on November 16, 2018. Our collective voices are needed in-person at this meeting which will be held near the FDA campus in Silver Spring, MD. This meeting will empower people living with depression and/or bipolar to share their personal views on aspects of wellness and name the wellness strategies that work best for them. For those who live farther out, they can participate via live stream.
Please register to attend either in person - or online here.

New report describes findings from survey of 5,630 patients and testimony at day-long meeting with FDA
Washington, D.C. – September 5, 2018 – A comprehensive report issued today by the American Sleep Apnea Association (ASAA) details the magnitude of human suffering, barriers to diagnosis and treatment, and unmet needs described by people living with sleep apnea and family caregivers. “Raising Voices for Progress in Treatment and Care” is based on first-person accounts conveyed at the June 8, 2018 AWAKE Sleep Apnea patient-focused medical product development meeting attended by 465 people (in person and by live webcast) and a Patient & Caregiver Survey that attracted responses from 5,630 adults of all ages from around the country.
“This report, released as part of ASAA’s annual Sleeptember awareness events, is essential reading for anyone dealing with sleep apnea – diagnosed patients, symptomatic individuals and those at risk for the condition, family members, healthcare professionals, drug and device developers, researchers, and regulators. It is the most complete account of sleep apnea from a patient point-of-view in existence,” asserted Adam Amdur, ASAA’s chief patient officer. “The powerful testimonies delivered on June 8 and through the survey illustrate the good, the bad, and the ugly of the patient journey with sleep apnea; these testimonies also chart an advocacy agenda to address our community’s many and varied unmet needs.”
Key findings of the AWAKE Sleep Apnea Initiative, as detailed in the report, include: 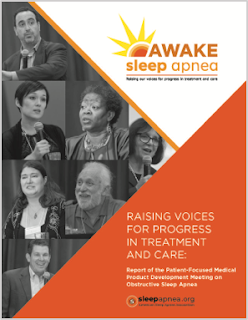 ·       Patients rated fatigue (80%) and daytime sleepiness (78%) as the top two symptoms with the most severe impact. Ratings by patients adherent to continuous positive airway pressure (CPAP) therapy were higher (fatigue – 81% and daytime sleepiness – 79%) than those not using CPAP (fatigue – 75% and daytime sleepiness – 75%) for these and other symptoms identified as having moderate to severe impact.
·       Barriers to diagnosis include low awareness of the condition among the public and medical professionals, lack of access to specialists and sleep testing centers, misperceptions and stigma related to the condition and its treatment, burdensome testing procedures, and financial constraints. Many participants described being symptomatic for years – or decades – before getting diagnosed.
·       Obstacles to effective therapy include problems associated with diagnosis as well as uncomfortable or inconvenient design of therapeutic devices, side effects and other challenges tolerating treatments, inadequate or punitive insurance coverage policies, misdiagnosis and/or other medical complications.
·       CPAP was the most-cited therapy in response to the open-ended survey question, “What have you found that helps the most,” yet there were many caveats and persistence was required to determine and maintain effective machine settings, find a well-fitting mask and good seal, and to properly clean and maintain equipment. More initial instruction, ongoing support, and better customer service were sought by many CPAP-treated individuals. 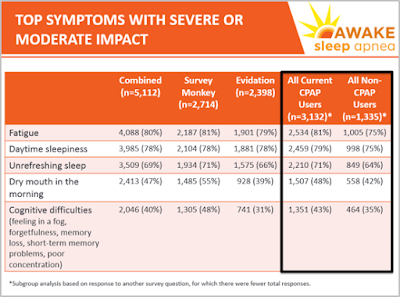 With 5,630 responses, the AWAKE Sleep Apnea survey is the largest undertaken in conjunction with a patient-focused medical product development meeting conducted in collaboration with FDA. ASAA used a combination of traditional and social media channels to attract respondents to the 32-item survey; 12 partnering organizations helped extend outreach. ASAA also partnered with Evidation Health to deploy the survey within Evidation’s consumer health “Achievement” platform. Fifty-six percent (56%) the survey responses came through ASAA and partnering nonprofits and the remainder came through Evidation. In general, respondents via the Achievement platform were younger, less severely affected, less likely to have been diagnosed by a physician, and were using fewer medical treatments. Where significant differences were found between the two cohorts, they are reflected in the report.
The AWAKE Sleep Apnea education and empowerment initiative launched on April 24, 2018 in preparation for the June 8 meeting with FDA officials. It was the first campaign of its kind for sleep apnea. ASAA applied to host the meeting as part of FDA’s expanded patient engagement efforts to help regulators understand what individuals living with various conditions experience, which symptoms present the most difficulty, which treatment benefits matter most, and how they perceive potential risks and harms associated with treatment. The report and survey results will be submitted to FDA’s Patient Experience Resources archive. Additional data analyses will form the basis of manuscripts submitted to peer-reviewed publications.
Nearly 18 million Americans of all ages have sleep apnea, a disorder that causes people to stop breathing during sleep and leads to daytime sleepiness, poor productivity at work or school, and increased risk of accidents on the job and on highways, consequences described in vivid detail in the report. The Centers for Disease Control and Prevention estimates that 50-75 percent of adults with symptoms of sleep apnea have not discussed their concerns with a physician. Left untreated, sleep apnea can have severe health ramifications and is linked to increased rates of high blood pressure, heart attack, stroke, diabetes, and other serious conditions, as meeting and survey participants described.
Founded in 1990, the American Sleep Apnea Association (ASAA) is a patient-led, nonprofit organization dedicated to the promotion of sleep health through research, advocacy, and education. To read the report, visit https://www.sleepapnea.org/awake-sleep-apnea-initiative/. For more information about Sleeptember awareness activities and other sleep health resources, visit www.sleeptember.org.
Posted by Tina - SleepHealth at 9:49 AM 7 comments:

Mark your calendars, because September is “Sleep”tember, and ASAA is planning a month full of interactive challenges, great stories, and tips to give you a great night’s sleep!  Join us on our Sleeptember website (www.Sleeptember.org), or follow us on Facebook, Twitter, and YouTube to join the fun!

For our 4th annual Sleeptember, ASAA will feature the “Portraits of Sleep Apnea” series, which will bring patient experiences of sleep apnea to life through videos, audio recordings, written stories, and still portraits.  See photographs of everyday people living with sleep apnea, taken by renowned patient advocate and photographer Gilles Frydman. Every day will feature a new portrait and story!

Plus, if you join us on September 5th, you will be among the first people to see the results of our landmark Patient & Caregiver Survey.  Over 5,600 people participated in this patient-driven original research, answering 31 questions about what it’s like to live with sleep apnea.  Some of the results may surprise you!

Watch video interviews of people sharing their sleep journeys.  Tell us YOUR story!  Challenge your friends and family to adopt healthy sleep habits.  Participate in interactive webinars that address sleep health.  Register for the SleepHealth Mobile App – you will learn more about your personal sleep patterns while contributing to the study of sleep apnea!

There’s lots to do, and we want you right there with us!  So get ready for the big kick-off on September 1, 2018 at www.Sleeptember.org, and keep coming back every day to see what’s new!

We can’t wait to see you in Sleeptember – until then, have a great night’s sleep!
Posted by Tina - SleepHealth at 8:36 PM 4 comments: